Goats and beans and barley-oh

From our base at Sandcastle Cottage on holiday, we’ve been striding out on a quest to complete the final sections of the Fife Coastal Path, and today was the day for the last ‘big push’ Newport to Newburgh 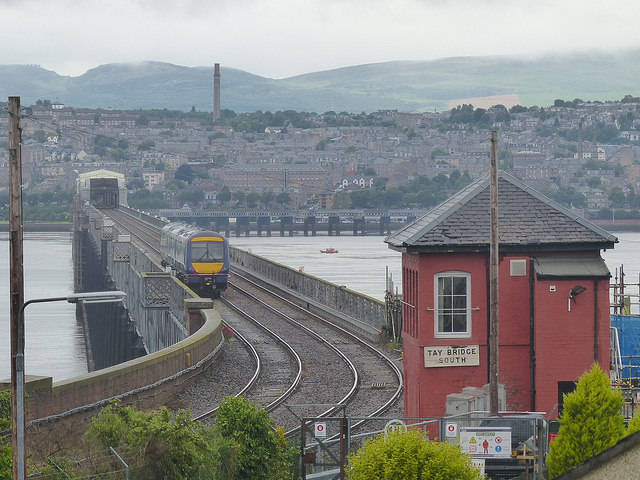 Until now, we’ve been taking the coastal path walks in short sections, with the longest walks being around 11 or 12 miles.  However, research for this final section Newport to Newburgh showed that there were no public transport options for the majority of the walk.

It’s one of the ironies of this section that, although there are trains passing through Wormit/Newport, they don’t stop.  My criteria for this walk had to take account of the fact that I would walk this part solo, I had access to a car, but had to avoid parking options at St Andrews as the Open Golf Championship was in progress, and that the walk was likely to take the majority of the day.  I used the Traveline Scotland app on my phone to track down a route which involved parking at Ladybank Station.  Not immediately obvious, but by a triangular route I’d worked out that I could catch a Stagecoach bus X54 going from Edinburgh – Dundee, which stopped at both Ladybank and Newport, then at the other end the little Stagecoach 94A would get me back in the evening from Newburgh to Ladybank.  There is free parking at Ladybank Station, and it’s a 45-minute drive from Crail to Ladybank (about 24 miles). 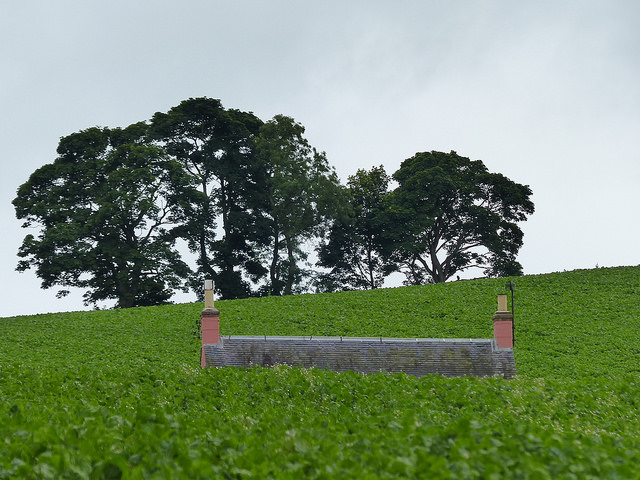 I caught the 7:30 bus from Ladybank to Newport, and although I’d completed the first few miles of the route the other day, opted just to start out walking from the point at the ornate Victorian ornament in Newport rather than waiting for a bus to Wormit which would take me to the fold in the map where Section 8 of the Fife Coastal Path commenced.  It was drizzling gently as I started to walk, just on 8 am, as I sent a text outlining my plans to my other half who was heading off to the Open Golf with our son.  I’d been reading up on long-distance walking and the need to tell people where you are going and when you expect to arrive was circling in my head as I departed.  Also the thought that I was going to be using my phone’s power to track my route on the “Map my Walk” app, rather than for texting or phoning. 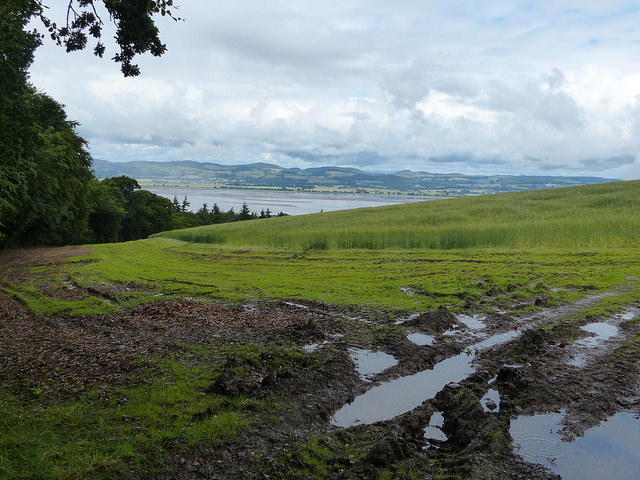 View over the river Tay

I admit to being a little apprehensive as I set off, not knowing whether I’d make it to the finish that day.  However, as I’d already walked a Marathon a couple of months ago with the Edinburgh Kiltwalk, I knew that I should be fit enough.  I took a little detour at Wormit, to catch the image looking over the Tay Bridge which starts this article. Then retraced my steps to find Beach Road where the path descended to the foreshore and along to the spot at Wormit Bay where there is a permanent memorial to those who lost their lives in the Tay Bridge Disaster of 28 December 1879.  You’ll also find markers at Wormit Bay designating the path from there to Balmerino, which is around 2.5 miles.  It’s a pleasant part of the walk, with grassy paths and views over the Tay, as well as some inland scenes like the submerged cottage which is the second picture I’ve chosen (above).  The folds in the land meant only the chimneys of the but ‘n’  ben were visible from the walkway.  On this part of the route I saw a deer leaping off for cover as I passed, and a field with three goats, and was walking through varied woodland with occasional glimpses of the Tay.  I was overtaken here by the only small group of three other walkers I met en route.  I glimpsed them once more as they were at the trig point on top of Norman’s Law later in the morning, but other than that only saw a few dog-walkers at points along my way.  Unfortunately as I reached Balmerino the rain turned quite heavy for a while and my photos are all rain-smeared.  I didn’t stop at Balmerino Abbey, although signs there indicated that there was a bit of exploring to be done.  At this point I was trying to work out whether to continue on or turn back, but the lure of the finish kept me going.  That, and the fact that my BBC Weather App had indicated that finer weather would prevail from late morning.

I paused just for a moment on the steep incline up from Home Farm to Muir Dens (between mile 105 and 106) to take the image above which shows the cloud levels lifting and views over the Tay becoming clearer again.  At some points I hadn’t been able to see the other side for the smirr of rain. 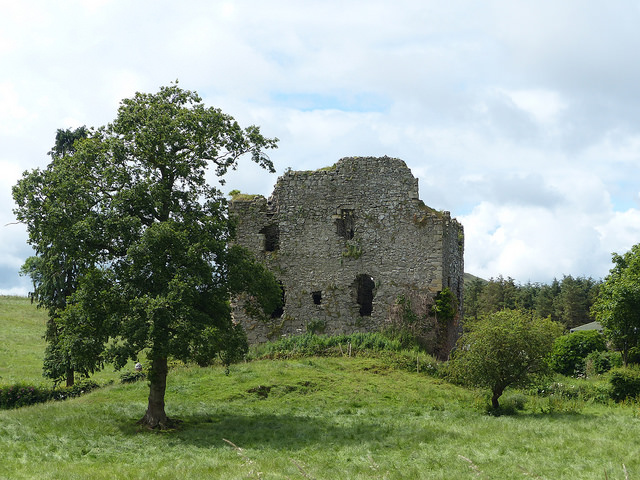 At the road junction between Corbiehill and Hazelton Walls the signpost for the Cycle Route which indicated that it was only 7 miles to Newburgh did tempt me, but the map’s indications that there was some adventure to be had by following the walking route kept me going straight ahead to Creich Castle (above) where hedgerows laden with ripening wild raspberries and gooseberries provided some lunch supplement!

At this point, it’s probably appropriate to mention the facilities en route… Unlike the East Neuk Section of the Fife Coastal path where there are options at each village for refreshments and comfort stops, this last section of the path necessitates the carrying of sufficient food to fuel you for a 20 mile walk, and a need for you to overcome any fears you have for taking your toilet stops in the open air.  The need to hydrate as you go is a fine balance with the need to pee!  Cafes at the start of the my walk (in Newport) were not yet open, nor were either of the signposted toilets – the one at the leisure centre at Newport being a particular disappointment as reaching it had meant a particularly steep climb uphill only to find that the leisure centre only opened before 3 pm a couple of times a week! 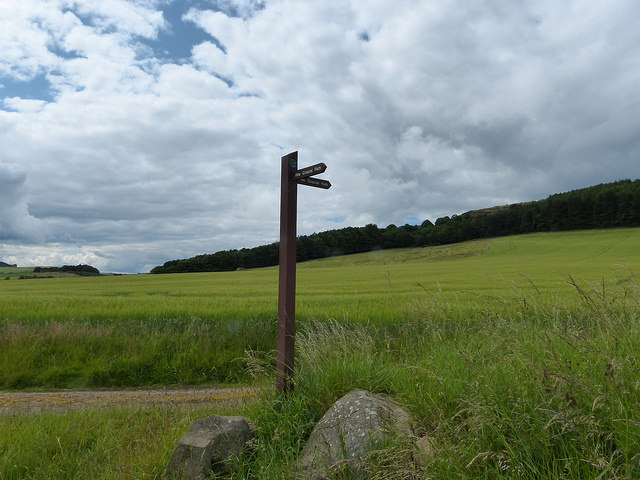 I’ve included the picture above of a couple of rocks by the way marker near mile 111 as, in common with the lack of comfort stops, there are also very few places where you might stop to take a little rest to eat the sandwiches you’ve carried with you.  The leftmost rock was my perch to send a text to report progress – according to my tracker I’d walked 14.15 miles by this point in 6 and a quarter hours.  I’m not fast – more tortoise than hare!  This marker and short rest also marked the end of least enjoyable part of the walk – the part through the forest section round Norman’s Law through to October Cottage.  It was wet underfoot, and the flies swarming around me meant that it was best to try to hurry through rather than pausing to enjoy the surroundings.  However, the views over open farmland once I emerged from the forest meant that I would not have wanted to miss this part of the route.  Glenduckie and the valley around there afforded some of the best inland views.

Leaving the signpost, and my temporary rest, I headed towards the one place where following the route was a worry – the map said “take special care nativaging along this section”.  When I arrived at this point, it turned out that the special care required was to look to the right where there was a gate blocking the way – there was a smaller access gate for walkers there.  Nothing to worry about at all!  From here the path was mainly clover under foot, until I came to a high point on the path where there were a couple of fields with sheep and cows which I’d to walk past until I reached the vista below and could see Newburgh in the distance.  The island in the centre of the Tay is Mugdrum Island.  From here I had about 3 1/2 miles to go to reach the final goal.

At this point, I already started to feel like I didn’t want the walk to end.  It’s one thing to reach a stated goal, but quite another to contemplate what you’ll do when you’ve finished a project and you’re ready for your next challenge.  I’ve still got a few blog posts to write up, and many, many photographs to review.

There’s just one more little part of the tale to relate.  Apart from the fact that the photograph below shows that middle-aged people should avoid the temptation to take a selfie!

When I arrived in Newburgh, the reading I’d done echoed in my head to remind me that I needed to cross a park and head towards the car park where the end of the route was to be found.  It felt like there should be (at the very least) a brass band playing, and some fireworks and maybe a pot of tea and a cake to round off the experience.  But I’d taken just that little bit too long to complete the route.  It was 5:22 pm when I took the photo below.  The cafes which are welcome ports for the Fife Coastal Path had already closed their doors for the day.  And my final tip for walkers who hope to use public transport to return to their starting point.

From the car park, you turn left to walk towards the centre of Newburgh.  On either side of the road are bus stops at which the Stagecoach 94/94a stop.  However, the information boards on each state that the bus stopping there is heading to Newburgh.  I was confused, and found myself on the wrong side of the road, at the wrong bus stop, just at the point when the 17:29 bus zoomed past heading for the terminus which is at the centre of Newburgh in front of the Laing Museum (which is marked on the Fife Coastal path map).  Having missed the bus, there was an hour to wait for the next one, and no option for tea and cake.  The Ship Inn however offered the option for an orange juice and a packet of crisps while I waited for the next 94a to appear.  Woo hoo.  Celebrations! 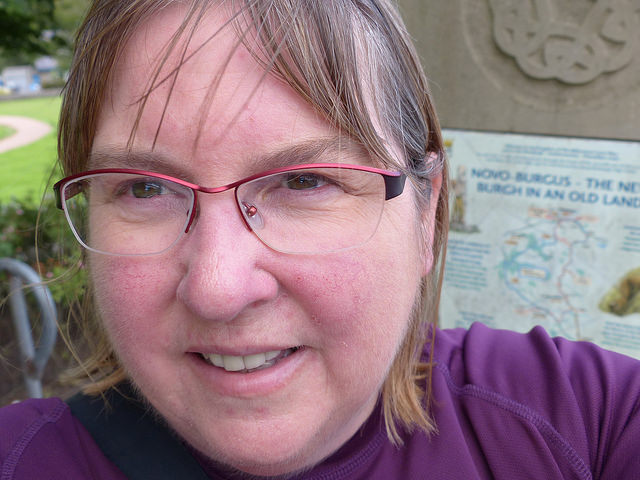 More photographs from this section are in my Flickr Album – Section 8 Wormit Bay to Newburgh.

Information about the Fife Coastal Path.

Base yourself at Sandcastle Cottage, Crail as an ideal place from which to walk the Fife Coastal Path from Leven through to the end-point at Newburgh (Sections 4 to 8 on the Footprint Map).  We look forward to welcoming you there.

Please note we are not taking any new bookings until the situation regarding the COVID-19 outbreak becomes clearer.