A glorious June day for getting out on to the Fife Coastal Path.  We parked at Inverkeithing – there are free car parking spaces signposted at various points around the town.  There is a car park specifically for Fife Coastal Path walkers at Ballast Bank.  However, we missed the turning for that and ended up parked in a small car park off the main street which meant we could walk past some of the old buildings which are a feature of the centre of the town.  The “Old Hospitium of the Grey Friars” had a well-tended garden to the rear from which there were views over the Forth towards Edinburgh. 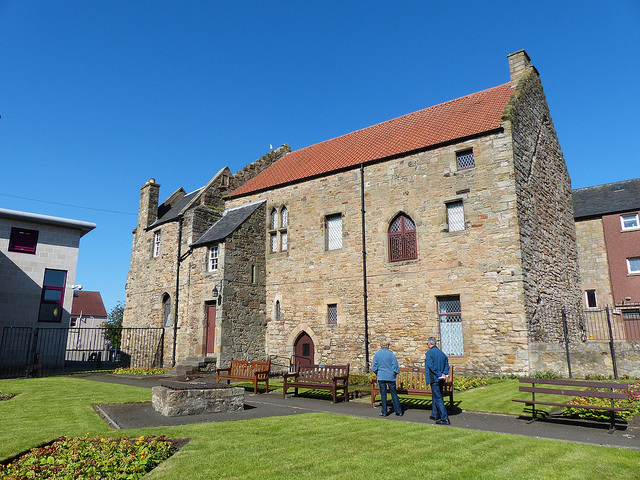 The Inverkeithing Town Hall always makes me think of a French market town for some reason.  We’ve walked this way before so had previously explored the Mercat Cross and some of the older buildings in the centre of the town.  We turned downhill by the Town Hall and found a marker showing the way to the Fife Coastal Path. 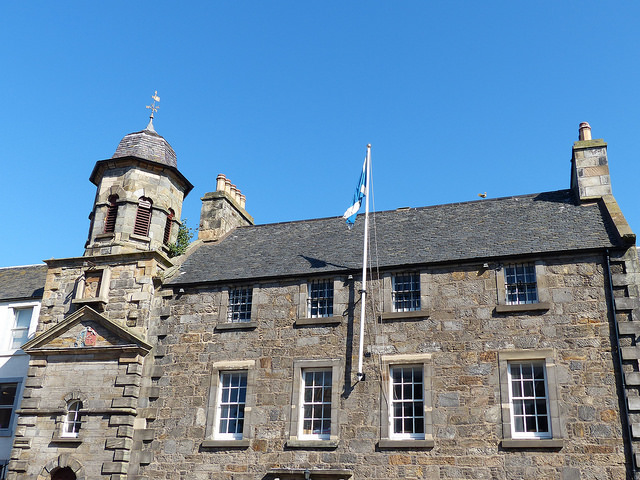 Viewed from side-on the new Queensferry Crossing (due to be completed in 2016) is not showing the its most distinguishing feature – the fan of support ropes which link the bridge span to the columns of the bridge. 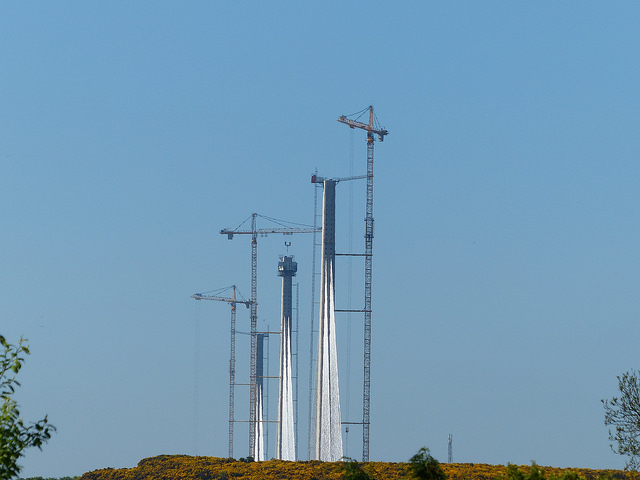 A glorious morning of blue skies and we were soon passing the old Quarry workings and being overpowered by the scent of the hawthorns which are in full bloom in early June. 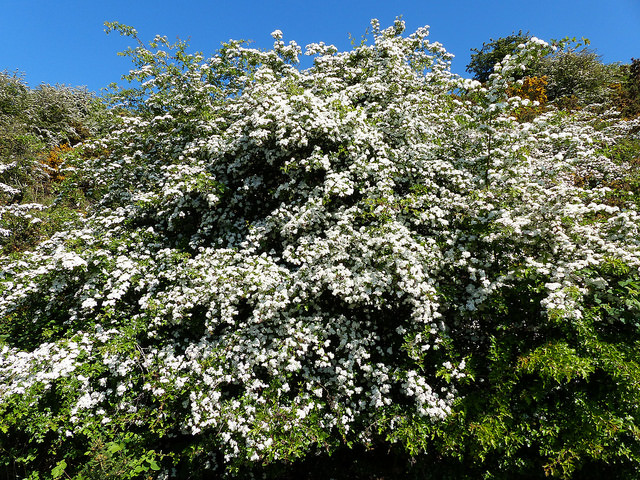 A feature of the walk up till you reach St David’s Harbour is the views back towards the Forth Bridges – you can just see the Forth Bridge and Forth Road Bridge in this shot.  We spent time looking out for the seals basking on the marker buoys in the centre of the channel and watching the river traffic as well as enjoying the sunshine. 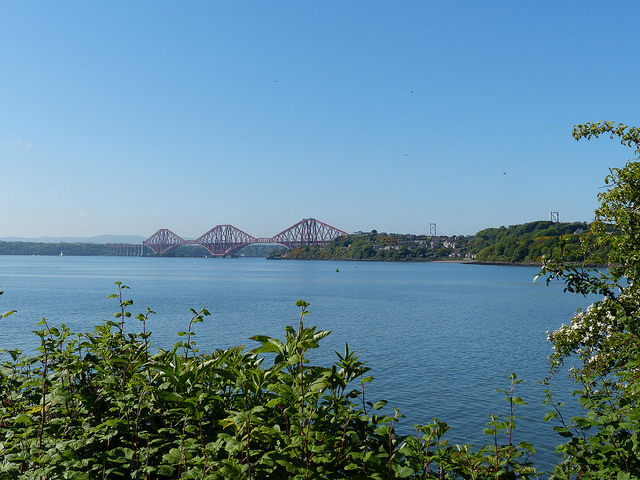 As you walk past St David’s Harbour and on to Dalgety Bay, you’re passing modern housing on your left, but great views out over the river towards Edinburgh, with Edinburgh Castle, Arthur’s Seat and Salisbury Crags all visible, although we didn’t select any of those shots to illustrate this post as we spotted a female eider duck with her ducklings in Dalgety Bay and that took our attention. 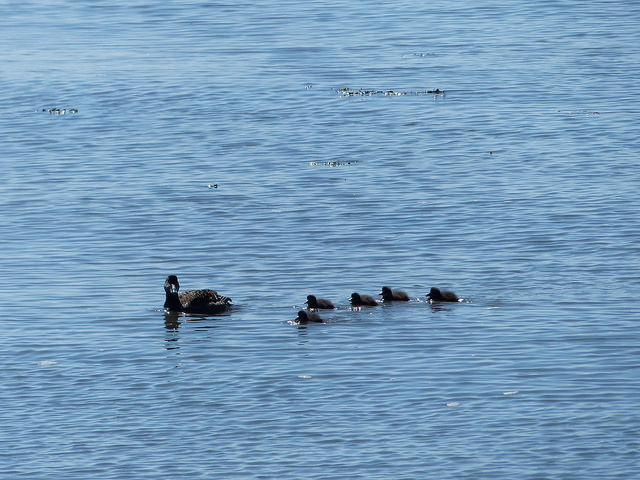 Before heading up towards the Braefoot Oil Terminal we stopped for a while at St Bridget’s Kirk, where you can see fine views and explore for a little while.  Although it’s looked after by Historic Environment Scotland, entry is free and it’s open all year.  Just take care as there are lots of gravestones on the ground. 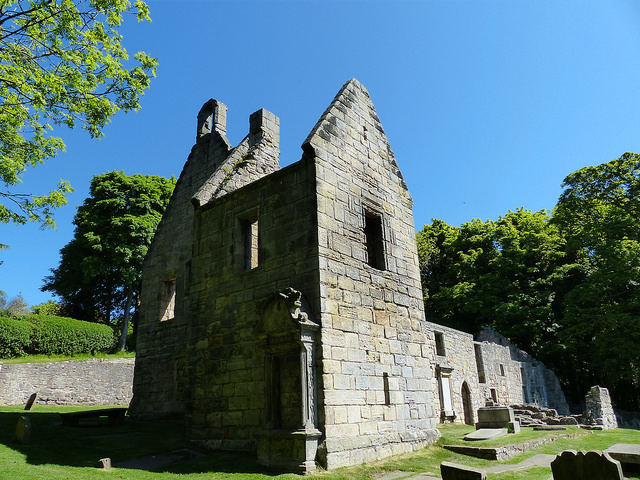 We saw the lettering on this one “1787 James Scott Two Breids” and wondered what this signified.  Have you any idea? 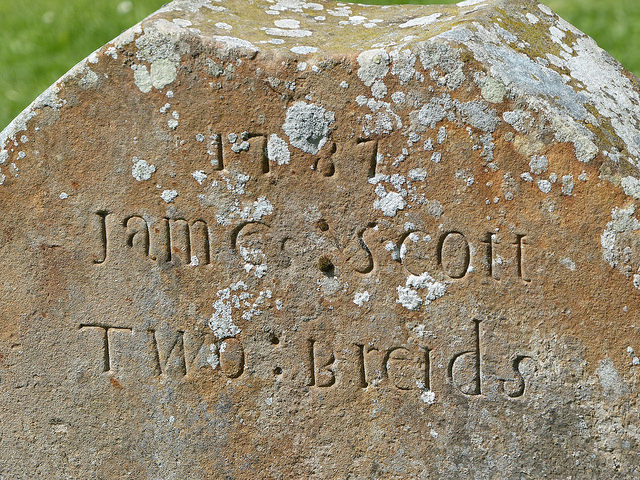 There were some shady spots along the path, and the wild garlic in full flower caught my eye as we passed. 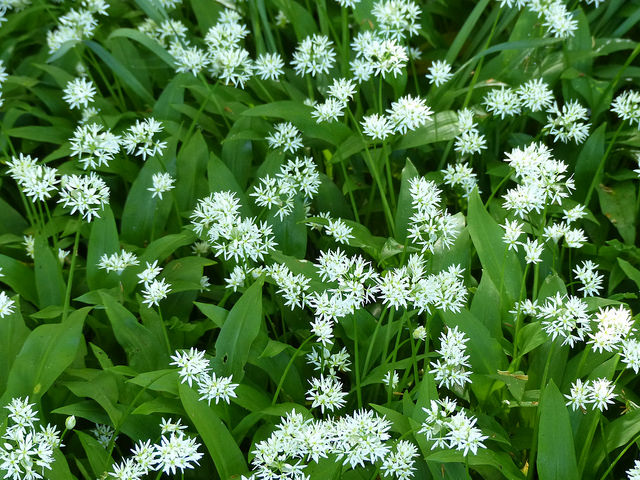 As we neared Aberdour where we’d planned to stop for lunch, we marvelled at the fabulous condition of the Aberdour Golf Club.  I don’t know if I’d get much golf played if I were to go there as the views to Inchcolm are so beautiful. 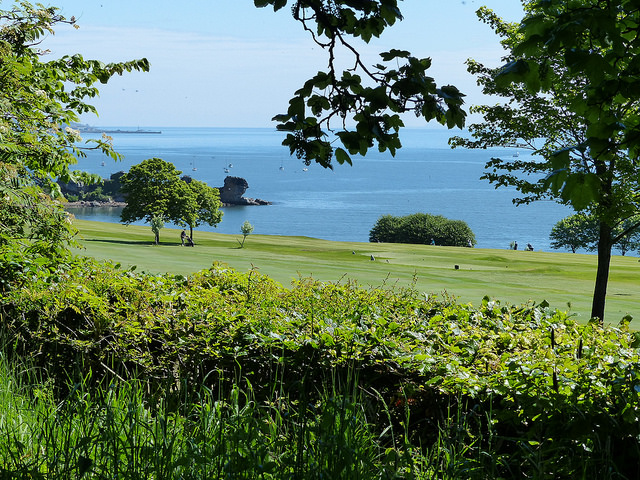 We had decided to spend a while exploring Aberdour Castle (particularly as it’s one of the Fife locations used for filming Outlander), but for some reason it was closed on the day we visited, just for one day – what bad luck!  We consoled ourselves by looking at the gardens round Aberdour Station instead. 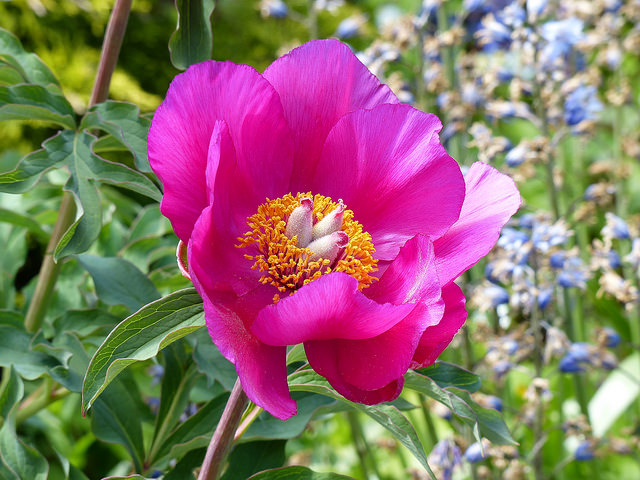 We also spotted this dinky van with livery from one of the local stores, Coastal Reflections of Aberdour, which will be another reason to return to Aberdour for further exploring! 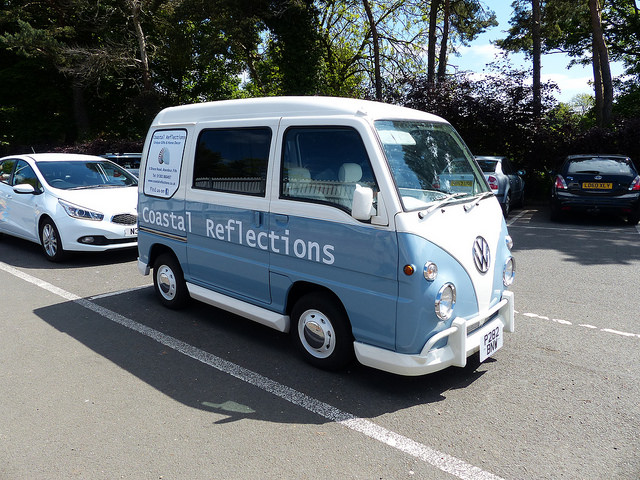 As we headed on down to the park by Silver Sands I spotted yellow roses which smelled glorious and looked so pretty in the sunshine. 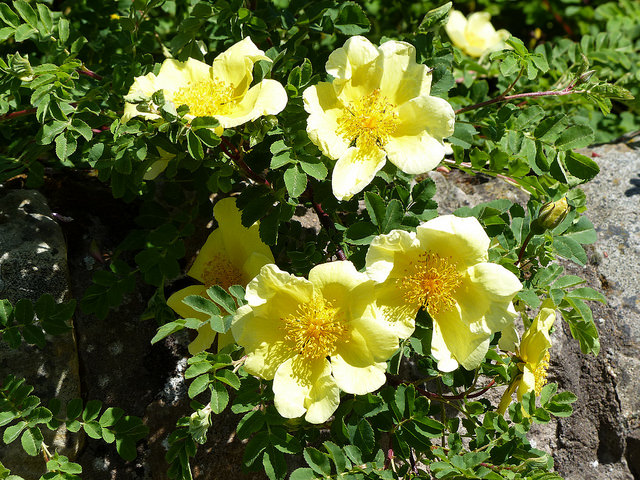 There were plenty of people enjoying the Silver Sands beach where Lifeguards were on duty to keep everyone safe.  This beach regularly wins good beach awards, and with a cafe and toilets just behind the beach, the facilities nearby are great too. 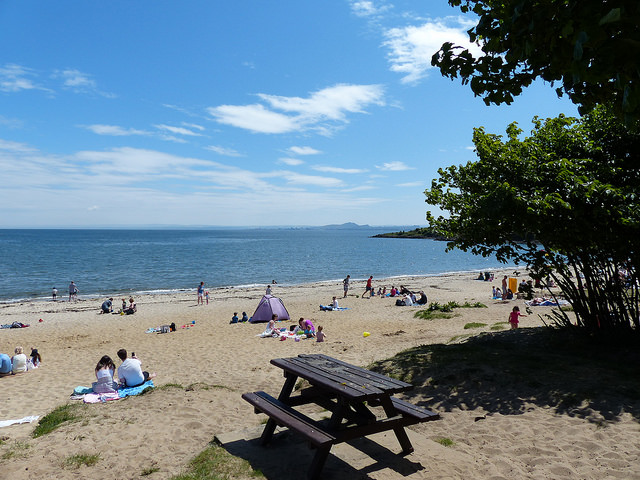 A feature by the path between Aberdour and Burntisland is this waterfall where the Starley Burn heads down to meet the sea. 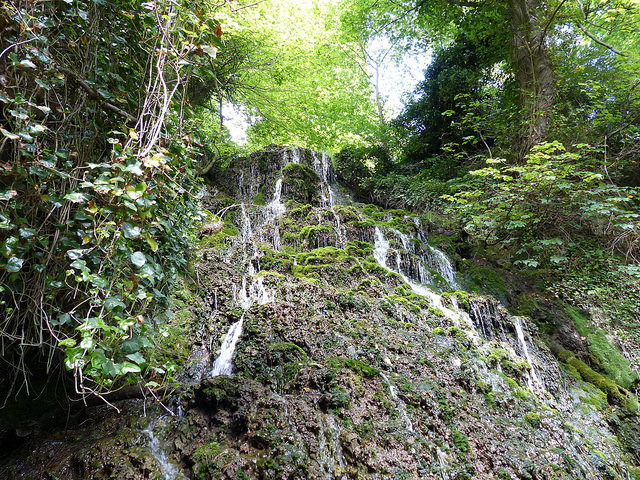 On the outskirts of Burntisland we spent a few minutes getting a decent shot of this little bird, which was singing its heart out.  Some video footage and lots of silhouette shots – but this one helped us identify a Whitethroat. 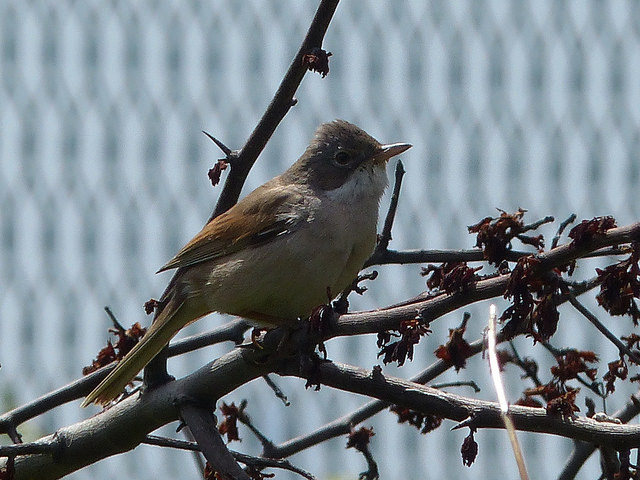 As we reached Burntisland, we stopped off at the Good Thoughts Cafe for an ice cream from Nelson’s of Culross (rum and raisin was our choice) and by passed the fun fair which had taken a spot on the Burntisland links to head to the promenade and a seat in the sun at the end of our 10-mile walk. 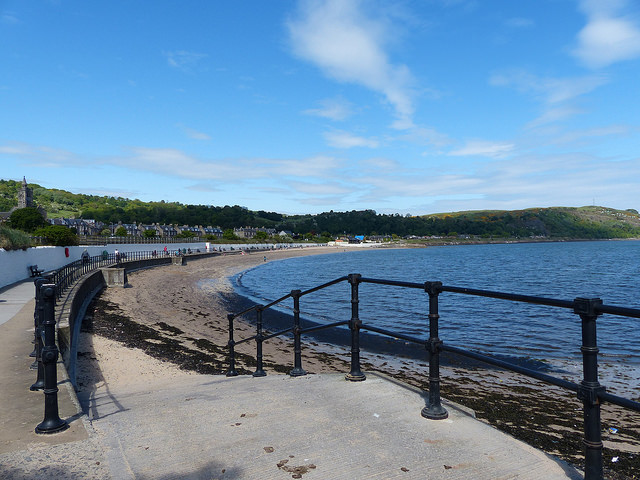 We saw the sign for our next section from Burntisland to Kinghorn, but decided that this could wait for another day. 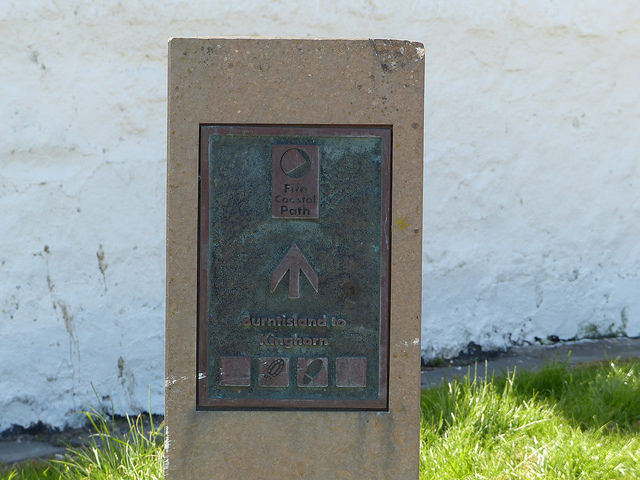 The Fun House on Burntisland Links with The Binn at the back – a hill top we’d like to explore at a later date.  We passed by the fun fair and headed up to the left, following the roads by the coast a little to find the entrance to Burntisland Railway Station for a quick hop back to Inverkeithing where we’d left the car. 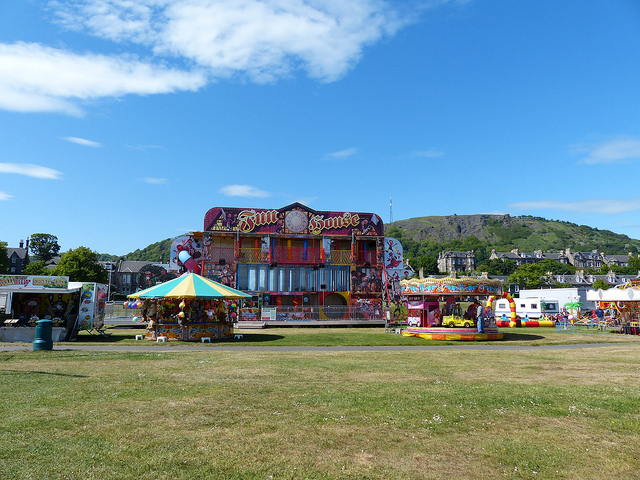 Keep Scotland Beautiful – Aberdour Silver Sands – listed along with our local beach at Roome Bay in Crail in the 2016 awards. 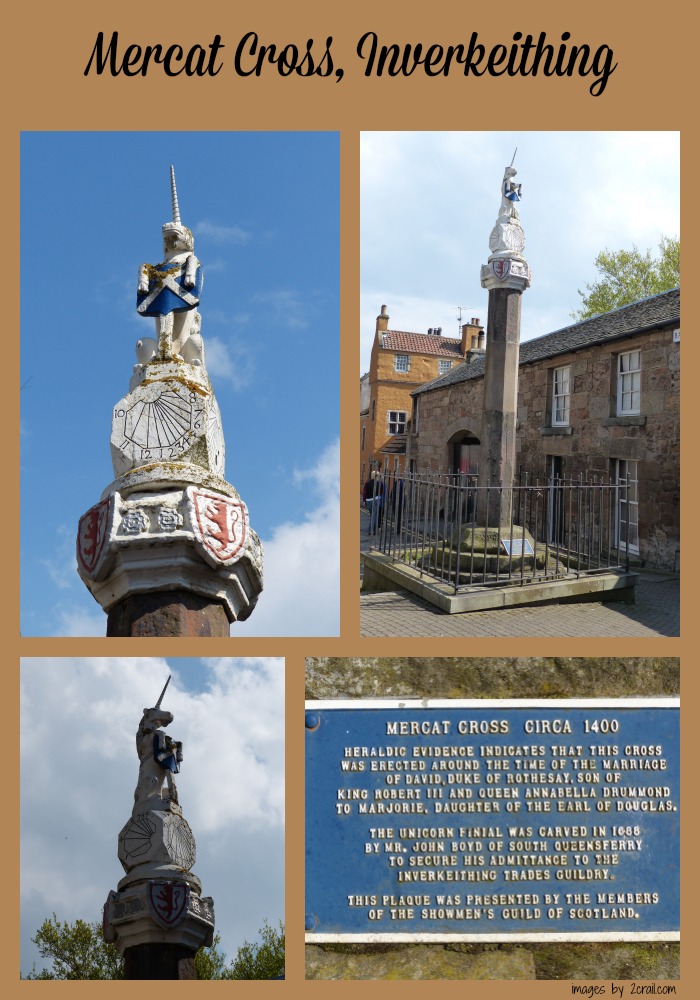 Sandcastle Cottage is available for booking and will reopen in March 2023.